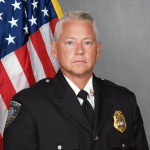 Chief Jeff Hadley was selected as the Chief of the Chatham County Police Department in December of 2017 after serving as the Public Safety Chief in Kalamazoo, Michigan for over nine years. Prior to that, Chief Hadley served as a Captain with the Ft. Wayne Police Department for 15 years and started his career in Cape Coral Florida in 1991.

Chief Jeff Hadley led the Kalamazoo Department of Public Safety through a “Mass Violence” event which occurred on February 20th, 2016.  A series of apparently random shootings took place at an apartment complex, a car dealership, and outside a restaurant in Kalamazoo County, Michigan. Six people were killed and two others were injured. Police detained a 45-year-old Uber driver, Jason Brian Dalton, as a suspect in the shootings. He was subsequently charged with murder, assault, and criminal firearm use two days after the shootings.

Chief Hadley has a Masters Degree in Management from Indiana Wesleyan University, is a graduate of the 220th session of the FBI National Academy and 48th session of the DEA Drug Unit Commanders Academy.

Chief Jeff Hadley is an Executive Fellow with the National Policing Institute and a member of the Police Executive Research Forum and the International Association of Chiefs of Police.