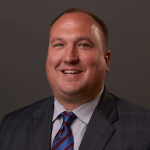 Greg Clark is a Managing Director with Stifel Financial Corp., focusing on public finance initiatives for state and local governments. Greg has worked with or for local governments his entire career, in a variety of different positions. After graduating law school, Greg began working with the city of Jeffersonville (IN) as their legal counsel for stormwater and drainage issues. Greg later became counsel to the Jeffersonville Fire Merit Commission, Jeffersonville Park Authority, and the Jeffersonville Common Council. While representing the city’s legislative body, Clark worked on issues ranging from the implementation of sewer rate increases to redistricting. In 2010, Greg accepted the position of Assistant Corporation Counsel for the City of Indianapolis. In this role, Clark represented the city in litigation at the local, state and federal level. In 2011, Greg became Special Counsel to the Indianapolis Director of Public Safety. In this role, Greg advised all divisions of the Department of Public Safety including the Indianapolis Metropolitan Police Department, Indianapolis Fire Department, and the Division of Homeland Security. Clark served as Chair of the Legal Subcommittee for Super Bowl XLVI that Indianapolis hosted in 2012. In late 2012, Indianapolis Mayor Greg Ballard appointed Clark to serve as Director and General Counsel for the Indianapolis Bond Bank. While at the Bond Bank, Clark oversaw the day-to-day operations of the Indianapolis-Marion County debt portfolio. Clark implemented new initiatives aimed at enhancing transparency and investor outreach, including a new investor portal and website. From 2014-2016, Greg served as a member of the GFOA Committee on Economic Development and Capital Planning (CEDCP). Clark was a frequent speaker at national and regional events on issues facing local governments, including the SEC’s MCDC program. Mr. Clark focuses on financings for issuers throughout the State of Indiana, at all levels of state and local government. Greg holds a B.S. and J.D. from Indiana University Bloomington. He is licensed to practice law in the state of Indiana as well as the United States District Court for the Southern District of Indiana.