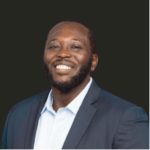 Sammie Wicks is a Senior Program Manager at the National Policing Institute’s Center for Mass Violence Response Studies. Prior to working with the National Policing Institute, Sammie served as a law enforcement officer for ten years. He began his law enforcement career with the Memphis Police Department in 2011, where he served in various roles to include patrol officer, crisis intervention officer, and community outreach officer. Sammie then served as a police officer with the Aurora Police Department from 2016 to 2021. As a member of the agency’s Crisis Response Team, he developed and managed the agency’s Targeted Violence Prevention Program. In this role, he partnered with a mental health professional and conducted behavioral threat assessments and individualized pre-criminal psycho-social interventions.

Sammie’s research focuses on transnational organized crime in diaspora communities, terrorist propaganda, and violent social movements. He holds an M.A. in International Security with a Middle Eastern and North African Religious and Political Thought specialization from the Josef Korbel School of International Studies at the University of Denver. He also holds a B.A. in History from Rhodes College.